Football is an adrenaline-filled sport, which is a sport that has been followed a lot, the masses that follow, and the team that most people hold as the way of life. It is a sport that is very enjoyable to play and watch, which is one of the most popular sports. Football is a sport, a passion, a pleasure, an excitement, a competition, a brotherhood and in short, a beauty. Imagine how good it would be if a professional football match was full of stadium with all the cheers? Without football audience, and an audience without football wouldn’t make any sense. Football is not just a sport but a fun. It is almost a chimney factory with very big budgets in football.

Most people tend to play professional football because the players and clubs’ earnings are high. But I have to say that; those who play football have chosen this sport not only for money but also for their loved ones. In most amateur clubs, players may not be making good money, but they cannot easily leave the football they love. There is no need to be professional or young to play football. There is no need to be a man to play football. Men and women, young and old people of all ages and varieties can easily play this sport. 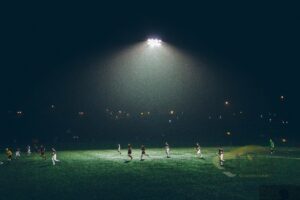 First of all, the desired surface should be leveled and compacted with various materials. After the cylinder is passed over, any possible collapse will be minimized. Before the ground, the area of ​​the stands of a sports field should be determined and all the rough work should be completed. In the stadiums, the stands can be concrete or steel.

Field floor companies and stand manufacturers may be separate or both firms can be found. My advice to you is to distribute the job. Thus, the risk will be divided into two and the process will be passed faster. A football field stand manufacturer should first think about safety and then give importance to visuality. There have been many stand accidents worldwide.

The Importance of Tribunes for the Football Club!

Football stands are in the form of floors and seats are placed on them so that the audience can sit. The grandstand seats must be flexible and comfortable for the audience. Since the sports fields are very crowded, these seats should never be ignited. Injuries and deaths may occur. The perimeter of the stands should be covered with grids and railings and the audience should be prevented from falling. When designing the football field, the shape of the stands should be calculated and how many people can fit according to the designated area.

In general, clubs build stadiums according to the number of fans and the intensity. Clubs earn significant revenue from ticket sales. When this is the case, the greater the stadiums and grandstands, the more participation. The grounds of football fields have recently been built with artificial grass. Artificial grass provides a cost advantage over natural grass and creates a quality ground. As you know; natural grass needs to be watered at certain times. In this case, the cost of water money increases.

Natural grass dies from fading from extreme heat. In extreme rainfall, the probability of fading of natural grass increases. Natural grass should be fertilized at regular intervals. Lawns that may be affected by natural phenomena should be cut at regular intervals. Moreover, to mow the grass mower and people need to do maintenance. Recently, the use of artificial grass, which is also encouraged by FIFA, is becoming widespread. Artificial grass does not require any maintenance and every part of the field is equal to each other.

They are not affected by any natural phenomenon. The ground and the stands of a field should appear as a whole with each other. In particular, architects who design the stadium should include designs in a different order. Different stands can be prepared according to the structure of the football stadium. VIP stands, closed stands, open stands should be able to be created in a different area.

Stadium seats can be designed according to the club’s color and style. The desired seat, such as reclining seats, metal seats, PVC seats, artificial seats, must be pre-selected. Stadium seats should not fade from the sun and should be able to handle enough weight.

The seats must not be removed easily. Seats removed by hooligans during many matches in the past were thrown into the field. Both the players and technical staff on the court were injured and the club faced serious damages. For this reason, if the structure of the seats is intact and installed well, this is not the case. The stadiums should not be flammable due to their structure. For this reason, all safety precautions should be considered when constructing the stands. You should consider all criteria when looking for a football field stand supplier.

Get A Free Quote

GET A FREE QUOTE

Please fill this for and we'll get back to you as soon as possible!